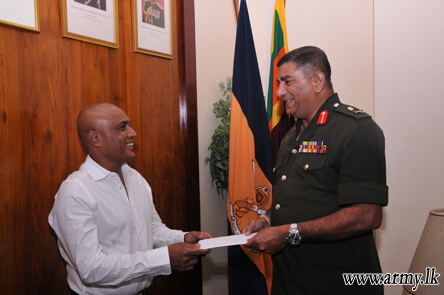 The ongoing ‘Abimansala – 2’ (wellness resort) construction project for dependent Southern War Heroes at Kamburupitiya received an encouraging fillip when members of the Ratnapura Association of Gem Traders met Lieutenant General Jagath Jayasuriya, Commander of the Army on Monday (9) to offer their first segment of the promised donation of Rs. 14 million towards the project.

Mr Nihal Premasiri of Nihal Gems, Ratnapura, who met the architect behind the project, Lieutenant General Jayasuriya at his office, Army Headquarters, this morning (9), presented a cheque to the value of Rs 2.65 million, as the first part of their agreed donation of Rs. 14 m for construction of 4 cottages in the ‘Abimansala – 2’ complex.

At the launch of the project at Wilpitawatta, Udumulla, Kamburupitiya in January 2012, the Ratnapura Association of Gem Traders, including Messrs Jinadasa Guruge (Guruge Menik) and his group, Tissa Ananda and Sarath Ananda (Ananda Gems), Vinil (Vinil Menik) and Tissa Jayawardene, a gem merchant (Kuruwita Paradise), pledged to undertake the cost of 4 cottages (each Rs 3.5 m), considering the sacred vision and mission of the project.

Monday’s presentation of the first segment of Rs 2.65 million, out of agreed Rs 14 m in full to the Commander on behalf of the Seva Vanitha Branch, initiated ‘Brave Hearts’ fund-raising project, serves as an inspirational boost to the noble objective and would help for its speedy completion.

Lieutenant General Jagath Jayasuriya, offering his sincere thanks to the donating representative of the Ratnapura Association of Gem Traders, recalled with gratitude the support they earlier extended to the Anuradhapura pioneering project last year.